2021, A new year, a new Developer’s Desk!
Some of you might remember what these are, but for those unfamiliar: with these posts we hope to peel back the curtains to give you, our community, a better look at all the things that have gone on, are going on, and will be going on for Istaria in the coming period.
This past year has been hectic for reasons we all know too well.  I imagine you as much as I have heard enough about the reality of our world on the news, so all we will say is that we hope all of you are healthy and in a good place going forward, and that this coming year is an improvement to all.
With 2020 we focused around continuing the main storyline quests in the game. This was in the form of The Ruin of Tazoon and The Cult of Nazderon updates. These brought ruin to the symbol of the Empire and introduced a previously unknown invading force - and to top it all off, the return of a maddened mage-king!
But it did not bring just ruin and destruction, for beauty did bloom in many corners of Istaria and a whole set of islands rose from the tumultuous seas north of Drakul.
On the more technical side there have also been many improvements, our tech-wizards applied their magic on many fields improving overall game stability, as well as implementing many new features like antialiasing support.
However, this is all what has occurred this past year, now for the real meat and potatoes of this Developer’s Desk: What to expect in the coming year.

The Year of Polish

As some may have already heard, or noticed in the revealed patch notes for Delta 312, 2021 will be the Istarian Year of Polish, what this entails is that we will be focusing extra attention on player progression throughout the mainline content currently in the game; from the first steps on Spirit Isle and Skalkaar to the various adventures in the Barasavian Desert. Already we have had several developers run throughout Spirit Isle, Skalkaar and New Trismus on all base classes including dragons, repeatedly, and gathering notes as they’ve done so to review how the overall flow could be improved.
Delta 312 contains a large amount of the early-game changes resulting from this, from giving all base classes that needed it some form of better self-sustain to whacking some of the enemies with the nerf bat repeatedly (looking at you Uddorakh).
To go in hand with this, our quest system has undergone a slight overhaul. The next client update will change the overhead icon that NPCs display when they have a quest. Now they will display precisely what kind of quest it is, so you can tell from a glance whether you want to pick it up! 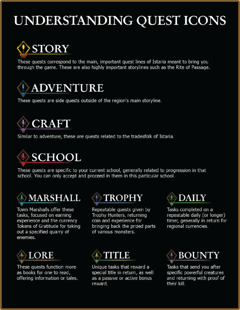 These will also be displayed in a specific order of priority, meaning no story quest will be hidden by a trophy quest icon for example.
As an important note, the vast majority of quests will have the correct classification with this client update, but there may be a few outliers as we are still actively tackling the project.

Of course, while we have a quality control team going over the existing content, our design team cannot sit still, and there’s still quite a bit of upcoming stories to look forward to.   The desert has not given up all of its treasures while darkness grows within the Western Deadlands and the trees whisper of a nameless fear.

On the tech side of things a large part of what has been worked on in the past year will continue to receive improvements, this means that many of the major systems in the game like the loading system, the networking and so on are being overhauled to provide better performance for all. Not only that but a lot of work has been planned in regards to the renderer; things like the transparency sorting within the game.
Furthermore, whilst it may not make the cut for 2021 as it’s still very much on our drawing board, we are working on an improved in-game reporting system so that our support system can more directly pull relevant information.

The art side of things is unique in this year’s Developer’s Desk, the art team has prepared something extra special for the community to commemorate the first fully new creature model since the Azular’s introduction many years ago:
Hello, everyone. The graphical side of Istaria has a bit to drone on about this year, so we hope you don’t mind us taking up such a section!
As many know, the artists have been cooking up a long-promised update to the models of the wyvern allies. Many among you may remember the initial release of the ill-fated dragon adaptation, which still lives on as a mod to this day. What many of you may not know is that shortly after this failed launch, another model was created, textured, and rigged that never saw the light of day.

Tale of the Wyverns

The story of the wyvern model is an interesting look into what can go behind the scenes, how easily a project may go skew, and how we’ve corrected these issues to move on and deliver the first completely new creature since the release of the azulars with Helian’s Tomb.
For those unfamiliar, the wyvern released in 2016 with the Niesa’s Fate update. The development of the first iteration of the model ran into several hitches which, in the end, resulted in the release of a model that did not meet our quality standards.  A relic of this model exists in the form of our update page for Niesa’s Fate, in which the Algontoth Wyvern is featured alongside the other epic allies.
As it was an edit of the original dragon model, it shared its problems - holes in the model and texture stretching to name a few. It got pulled from the Blight release very swiftly, but the files have remained for years. You can see the model in high quality below.

Almost immediately after pulling this model, a promise was made that the wyverns would come back with a new model. While externally nothing occurred, internally an effort was immediately made to produce a new model. This model had no variation in body plan per type and instead simply had different colored textures. This model was created within the months following Niesa’s Fate and received a texture a time after that.
Various mistakes made in its development resulted in a collection of errors growing over time, amounting to the progress slowing until it gradually ground to a halt in 2017. In its final form, it was deemed unusable, and the project was once again put on the backburner. The previously unseen model is shown below.

This was not to last, however, and this brings us to today. We recognise that letting the placeholders stay in the game for over five years has been nothing short of a disappointment. With this release, we hope to build your excitement and trust in future graphical projects.
Without further ado, here are our brand new scaled cousins.

A turntable is viewable here.

These final creatures were put together within the span of a few months of work time, spread over about a year. This includes everything from concept art to the final touches on all animations.
We want to maintain a high standard of quality for all visuals released to the game. In the past, with the turmoil of returning and leaving art team members, this was not achieved. Now, with a more constant and stable collection of excited artists, we hope to keep pushing forward into the future with new vibrant and high-quality additions to the game.
With what we have learned from the wyverns, we are now dedicated to pushing forward with the Visions update we teased in our last development diary. While we cannot give an ETA, we want to talk about what we have so far and give a sneak peek at the future.

For those unacquainted, ‘Visions’ is the total revamp of all of our race models, starting with bipeds first. Afterwards, we plan to give Dragons a large-scale touch-up, but we have not yet decided to what length we will affect their models due to their drastically higher complexity and the attachment our players have to the existing visuals.
The process for bringing player races to a higher standard is moving steadily, but slowly. We do not want to make any errors that can cascade and cause problems down the line, so we are taking things slowly. Therefore, we do not have an ETA. Without further delay, however, here is a direct comparison of our original human male to the new human male. 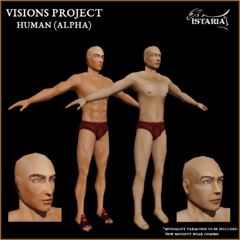 Note that this model is still early in development and may change over time. We hope that this preview gets you excited for what our game is capable of!
On top of this, we have another piece of concept art for you to round this very long message off. As we are changing the specifics of our model’s textures, this results in us having to redo armors. We have nothing solid enough to show on the model itself, but we want to share with you our concept art for updated armor.

With these visual improvements both in-game and coming to the game, we hope to regain your hope and trust for Istaria’s visual future. I believe in clarity and honesty when it comes to our shortcomings. The wyverns were a rocky, messy road that led us to where we are today, but are better for it.

We hope this developer’s desk has given you some new and exciting things to look forward to, many thanks to you, the istarian community, for your continued support and passion towards Istaria.