The Summer Update 2015 is finally out the door and contains all sorts of fixes and tweaks to improve Istaria. As announced in the Developer's Desk Summer 2015 post, the development team has been focused on fixes and tweaks. While these sorts of updates are not as exciting as new content, they are important and why the developers have committed a block of time for this work. This update includes many fixes to quests, world content, the game interface and crash fixes (and even a few performance improvements).

Some of the more important updates are:
- Updated many resource nodes on Abandoned Isle to match (spawn appropriate resources) to nearby Imperial machines.
- New Tier 4 and 5 Crafting boons introduced. All boons can now be purchased from Quartermasters.
- Daknor and Gruk no longer excessively stun you mercilessly (so much benefit in such a small change!)
- Many, many quest, emblem, ability and item tweaks and fixes
- Revamped trade interface with streamlined filtering options
- Revamped sound emitter system to make those bird tweets sing true
- Various crash fixes
- Sound and texture fixes

The next set of updates and fixes are just around the corner, and the devs are already moving forward with the next portion of work, so stay tuned!

Fixes:
- FIX spelling in ability descriptions from addtional to additional.
- Small patch of Viridian Azulyte spawns along western edge of Lesser Aradoth Deadlands. There is a nearby crystal shaper that can be accessed.
- Update to Emblems: Grave-Digger gives +2 (delay adjusted) against Undead, Relic Hunter gives +5 (delay adjusted) against Undead, Relic Protector gives +10 (delay adjusted) against Undead, Wolf Hunter gives +3 (delay adjusted) against Animals.
- Loricatus Beetle: Gritus Maximus spawns again on Kion beaches.
- Geleon's Master Scroll Replica will now consume itself when used (thus allowing you to use the scroll).
- Ethien the Tempered will allow you to forget (erase) Tinkerer school.
- Focus of Spirit will now teleport you to just outside of lair entrance (Council Elders), instead inside of lair.
- Crafting Boons are now available in Tier 4 & 5. Tier 4 is known as Benefit, Tier 5 is known as Benevolence. Benefit gives +8 and Benevolence gives +10. Exception is Mining Benefit which gives +12 and Mining Benevolence which gives +15.
- Quest: 'South March: The Essence of Research' is now available to dragons. Purified orbs do not need to be crafted by player and can be obtained from other players.
- Abandoned Isle resource nodes has been adjusted on eastern side of isle. Relevant resources now spawn near the relevant Imperial buildings.
- You can now 'forget' (erase) enchanter, gatherer and miner schools from Ethian in Dalimond (Forget Schools quest).

Fixes:
- Typo in Spike Scales IX - Return to Dralk (instead of Chiconis) in feedback message upon killing the 20 Blood Skulks.
- Tier 2-6 Storehouses' skill range has been adjusted to 200 (difference between minimum and optimal).
- Tier 3 Barn has skill range adjusted to 200.
- Crafting Boons/Bounty/Blessing techniques no longer drop from mobs. They are now purchased from the appropriate tiered Quartermasters, including the new Tier 4 & 5 Benefit and Benevolence. The price for the boons will be 1.5x higher than the normal price of craft techniques.
- Renamed Bloodskulks to Blood Skulks (to match Forest Skulks, their cousins)
- Fix rotation on empire structures that have machines (some were rotated on prod, but the delta (276) doesn't rotate placed machines)
- Gruk's Tormented Mind ability no longer stuns (potentially a 0:50-1:03 stun) or lowers nature/blight resistances (but still keeps it's DoT effects).
- Tormented Mind recycles every 75 seconds, instead of 50 seconds. Duration reduced from 1:03 to 0:40, frequency from 0:11 to 0:10.
- Gruk's Chain Lightning V now does nature damage instead of slash damage.
- Daknor now has Shield of Blood (equivalent to Blood Shield II that Blood Skulk Bloodmages use).
- Daknor no longer casts Spellbind (which was being casted every 15 seconds). He still has Petrified II, which is similar to Spellbind but requires 5 hits to remove and is not dispellable. Recycle remains at 75 seconds.
- Guglar the Shaman (Named Nah'guk Gatherer) is now known as Gruglar the Shaman (typo in spelling). 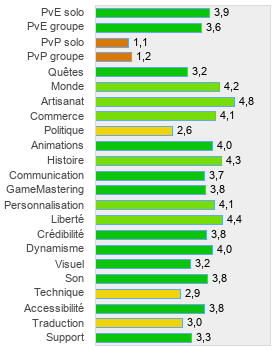